The Nightmare Before Christmas (1993)

Deconstructing Tim Burton's 'The Nightmare Before Christmas': Behind the Production & Story Origin Until ’93, naturally, people did not think to mix Halloween and Christmas, let alone put it into a movie. However, if anyone could make it work, Tim Burton would be (and was) the person for the job. He made a daring timeless film and crafted a new and enjoyable tradition that successfully joined two holiday seasons. Nonetheless, even with all the critical praise, it has received, many may still be unaware of the story’s origin and inspiration. So, a distinguished stop-motion animated film, the story as much as its artistic style, is eminent and worth learning more about how it came to be.

Thus, like the film, Burton was inspired by winter holiday cheer and, more specifically, the poem Twas the Night Before Christmas, which he parodied to create pumpkin Jack Skellington and all his ghoulish companions. The project did not come together quickly, however. Eleven years before the theatrical release, Tim Burton had a poem written of the same title in 1982 while working as an animator for the Walt Disney Company. He had in mind and was inspired to blend The Night Before Christmas by Clement Clarke Moore and How the Grinch Stole Christmas by Dr. Seuss. Burton even stated in an interview once, “Every Christmas you’d watch things like Rudolph the Red-Nosed Reindeer, or The Grinch… those were my favorite holiday specials growing up.” Burton went on to recall when he worked at Disney in the early Eighties, he had composed a project that was “the Grinch in reverse, so to speak, about this character who finds Christmas and loves it and decides to do it himself.”

Moreover, the project remained latent for several years as he failed to convince Disney of his pitch. Although his later successes (mainly Vincent) would officially help to seal the deal in 1991 through Disney’s Touchstone Pictures, due to notions, it may be too scary for children and possibly taint their wholesome brand. Thrust into production without a script and relying dominantly on the original poem—which is why fans of both the (movie/poems) find it strikingly faithful to the source material—Burton and the crew’s confidence propelled them into what would become a successful and unforgettable animated story.

Deconstructing The Nightmare Before Christmas’ Production

But besides the script, the rest of Burton’s team is where the visual magic came to life, with more than 100 technicians and artists working diligently for three years. Henry Selick (Coraline, James and the Giant Peach) was hired to direct the film, though he credits the story arc, concept, character design, and general tone of the film to Tim Burton. As for its catchy spooky tunes, Danny Elfman‘s (Corpse Bride, Men in Black) score and nearly all of the other preliminary work done for the story was done by producer Burton and finished before production began. Once the music was finished (crucial for establishing the timing), storyboarding followed, and then the actual filming took place. 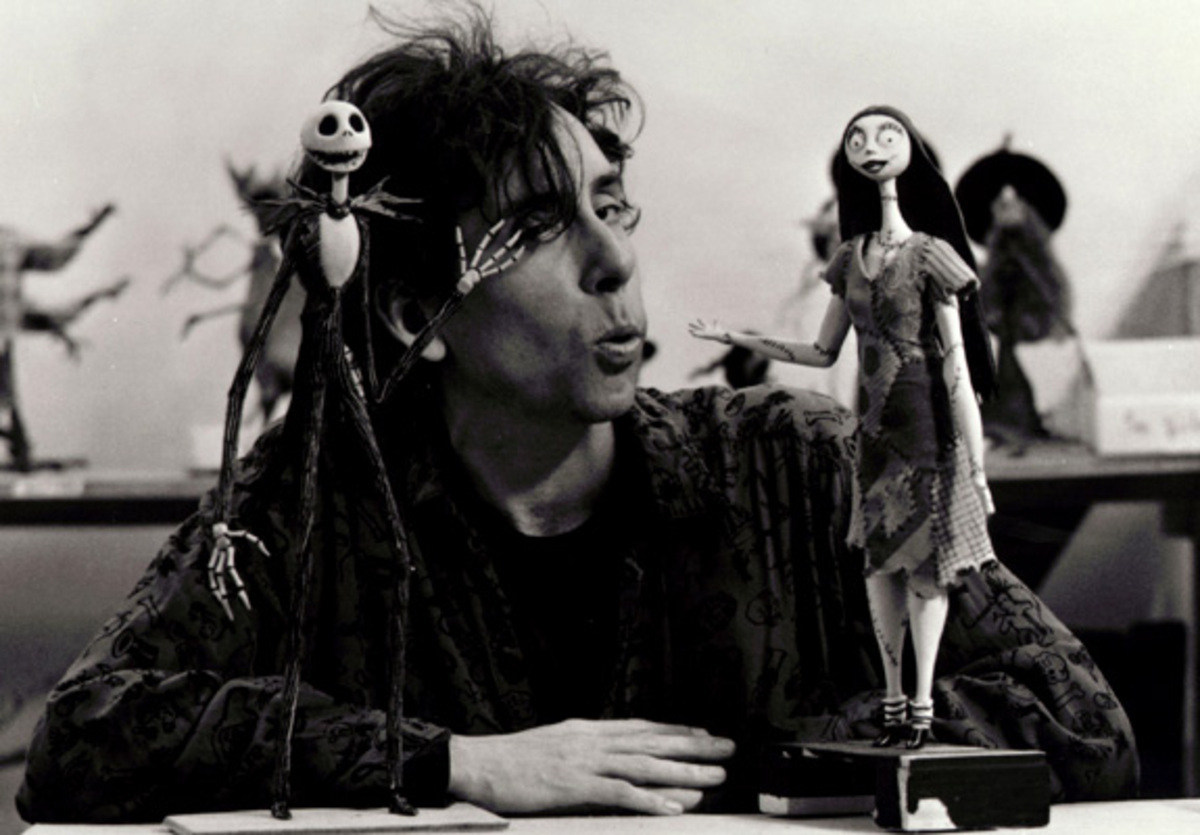 Assembling a team of 13 animators and countless other specialists to assist with the fabrication of puppets, sets, and props, Burton and Selick ended up with 200 sets and hundreds of individual puppets. Altogether, everything ended up occupying 19 soundstages. As for the film style, Burton wanted to evoke the illustrative, pen-and-ink aesthetic of artists Edward Gorey and Ronald Searle. The creators have stated the sets were coated in either clay or plaster to make it easier for artists to go in later and scrape an etch whatever medium so that the environments would have extra linework that would elicit two-dimensional illustration. 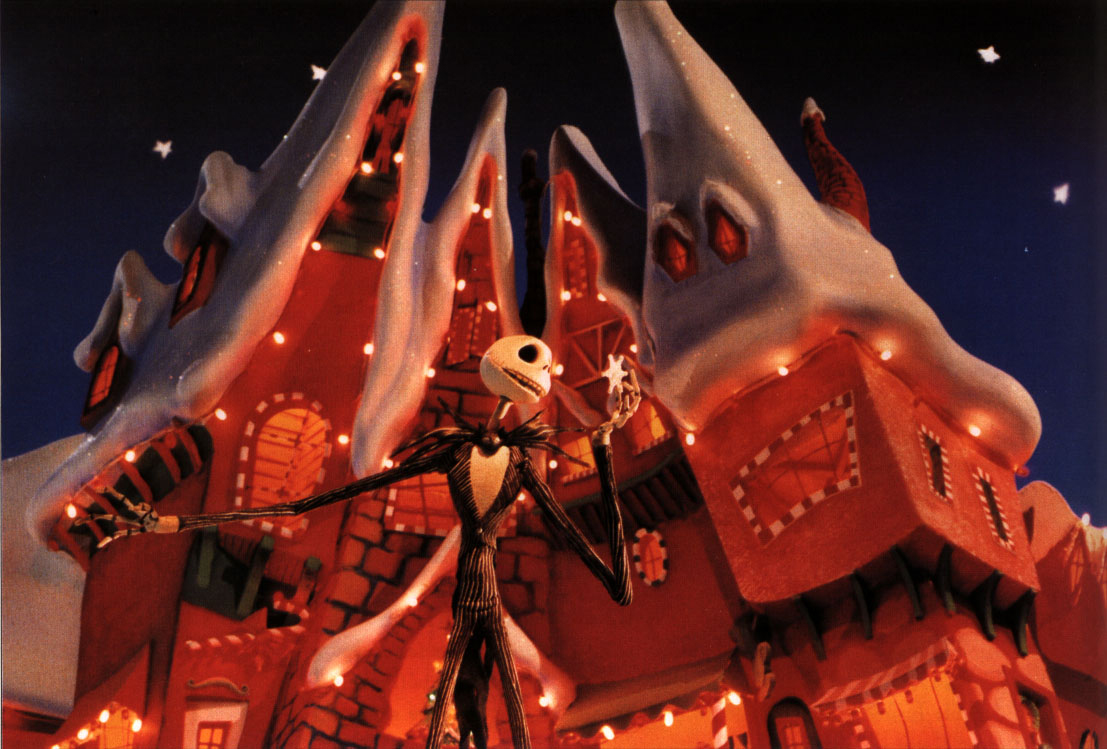 Deane Taylor worked as the film’s art director and has stated Burton was precise about the colors to be used. Take Halloween Town, where it had strict parameters for its palette: only black, white, and orange were assigned. He was inspired to convey early German Expressionist filmmaking—particularly The Cabinet of Dr. Caligari by Robert Wiene. On the other hand, Christmas Town bears a striking aesthetic resemblance to Whoville from the Chuck Jones-directed How the Grinch Stole Christmas than the “real-world.”

They are all cookie-cutter houses in an ultra-bland environment—the way Burton has always depicted the suburbs. He is from Burbank, California, so that could be influencing his style of neighborhoods. Then, as some know, fully animated films are shot at 24 frames per second—which producers will often take shortcuts to finish—Nightmare, nonetheless, was entirely animated. Meaning, for every second of footage, the puppets on screen had to be posed and photographed 24 times. It took an extreme amount of work in the film’s construction, which we can easily see in its whimsical, richly imaginative, aesthetic quality displayed in every frame.

Twas The Night Before Christmas

Finally, knowing what inspired Tim Burton’s holiday tale, if not known before, fans of the poems and Nightmare may begin to have a greater appreciation and familiarity with the screenplay nods found throughout as much as its style. Such as when the narrator references Halloween Town, with similar lines like “Twas a long time ago, longer now than it seems, in a place that perhaps, you’ve seen in your dreams… ” Similar to ‘Twas The Night Before Christmas, which begins with, “Twas the night before Christmas when all through the house, not a creature was stirring, not even a mouse.”

Unlike Jack’s world, of course, the original poem describes a peaceful winter night approaching Christmas, while the pumpkin kings are full of monsters, witches, and demons. The feeling in Halloween Town indeed taints jack’s version of Christmas. Instead of fantasies of sugar plums, the kids have nightmares. No caroling—the kids go trick-or-treating. And still, by the end, Christmas is saved by Sandy Claws. Nevertheless, Tim Burton’s The Nightmare Before Christmas continues to stand on its own as the only magical two-holiday celebration for everyone. Annually every amber fall, and nippy winter. The Humor of ‘Breaking Bad’: Best Moments From All Five Seasons How ‘The Fellowship of the Ring’ Changed and Improved High Fantasy