There is a new Supe in town. Set to join The Boys Season three, Supernatural‘s Jensen Ackles will appear as the Captain America/Avengers parody character, Soldier Boy. The Boys showrunner, Eric Kripke, is also the creator of Supernatural. Moreover, known for being naïve and a comical relief, Soldier Boy is still a minor antagonist within the comics and serves as the leader of the superhero group Payback, while also holding aspirations to become a future member of The Seven.

There are actually two Soldier Boy characters who are very different versions from one another. The original character’s statue can be seen in season two of The Boys in front of the Vought building. Referencing the Soldier Boy who fought during World War II, was the first Supe to gain popularity, and led a superhero group called The Avenging Squad (now ‘Payback’) who destroyed enemy tanks.

Though, it did not end well for this version of Soldier Boy and his squad. Causing a massacre of both his team and American soldiers he was supposed to assist, it resulted in him being killed by George Mallory (Grace in the show). Vought would present Soldier Boy to the public as a single individual who never aged, but in reality, the current Soldier Boy is far weaker than his predecessor. He is also dim-witted, naïve, cowardly, and known for being intimidated by his fellow Payback member Stormfront and urinating himself whenever faced with more powerful superheroes.

So, as a result of Soldier Boy’s naivety and blind aspirations, he is regularly taken advantage of by high-tier superheroes to either do their dirty work or please them sexually. For instance, Homelander promises him a spot in The Seven in exchange for a sexual relationship with him. He has a habit of reciting the names of states in the middle of combat and commits mass murder, usually when instructed by someone else. 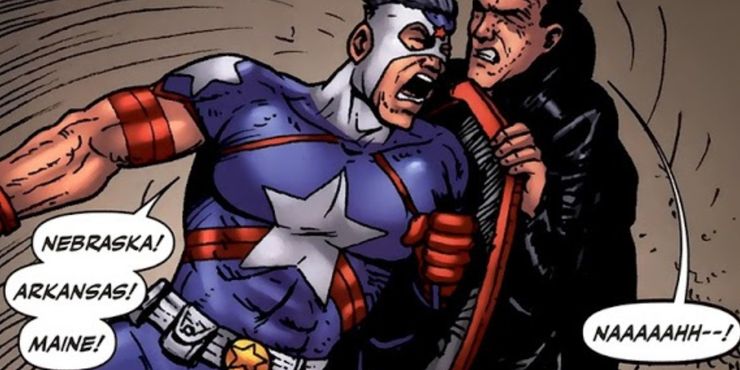 Then, as for his power set, he has superhuman strength, speed, expertise in hand-to-hand combat, and skilled use of his shield—hence the Captain America parody. Knowing this character description and Kripke’s history with Ackles, many changes are expected to be made. And seeing as the show has a strong emphasis on world-building, Jensen’s story could follow the World War II exploits of the original Soldier Boy.

The superhero group lead by Soldier Boy they are the predecessor for “the avenging squad” and a parody of Marvels Avengers. They are also the second most substantial superhero group after The Seven. Its members include Stormfront, Tek Knight, Soldier Boy, Swatto, Mind-Droid, Crimson Countess, and Eagle the Archer. As we know, Stormfront was gender-swapped and changed a bit in the show, but the male version is noted for the real leader of Payback as he is much stronger and braver than Soldier Boy. A Nazi, the Stormfront from the comics, is one of the most powerful Supes, comparable to Homelander; his powers include electricity manipulation, flight, super strength, and weather manipulation.

He, along with the rest of the Payback members, are sent to eradicate The Boys and is partially based on Thor from Marvel Comics and Captain Marvel, nevertheless wretched in every way. Tek Knight is one of the only superheroes, not a Supe, relying on technology to do his fighting and hero work. Swatto is a bug-themed hero who presumably only speaks in buzzing noises and can fly and manipulate his size like Marvel’s Ant-Man. Mind-Droid pretends to be a cyborg, which is later revealed to only be a telepath in a robotic suit.

Crimson Countess—the only female member—she resembles Marvel’s Wanda Maximoff/Scarlett Witch in costume and red color. In a romantic relationship with Mind-Droid, she was active during World War II and can fly and has heat generation. Lastly, Eagle the Archer is the only other Payback member who made a physical appearance on the show in an enigmatic storyline involving The Deep that we still are not sure where he will end up.

Unlike most members, he seems to be a friendly, positive person, eager to help those around him. There we have it, all members of Payback. It should be interesting to see whom Eric Kripke brings on to the show along with Soldier Boy. A fan of Scarlet Witch, seeing Crimson Countess on The Boys, would be a great addition to the cast.

So are you excited to see Soldier Boy added to the cast? Which member of Payback would you like to see cast for The Boys? ‘The Boys’ Season 2 Episode 4: The Calm Before The Storm