‘The Invisible Man’: An Inventive Update That Gives Women a Voice H.G. Wells 123-year-old sci-fi novel, The Invisible Man, is now in the hands of efficacious horror director and writer Leigh Whannell, where this modern update, he renders the story terrifyingly anew. Distinct from other remakes, Whannell’s is justifiably a film of its own, as he elects to tell the story from the point-of-view of the victim and not the antagonist. Enter Cecilia Kass (Elizabeth Moss).

Impressively shrewd, his take is inventive, chilling, and aggressively numbing, becoming more than a science fiction film but a study of how cruel reality can be. As such, The Invisible Man focuses on a young woman (Cecilia) who escapes from her manipulative and powerful optics entrepreneur husband (Adrian).

Following his death, she believes he is the mysterious figure stalking her, in which later, deducing he has acquired the ability to become invisible. In this regard, Whannell’s approach involves conveying the story entirely from a woman’s point-of-view and relying on her reactions to show and not tell the horrors of the world he crafted. Like so, it makes the audience look to Cecilia to tell us everything we need to know, to necessitate gripping character development instead of overwhelming us with exposition. To this effect, topics of domestic abuse, revenge, and female empowerment are well-versed through Moss’s character. Although The Invisible Man was not Cecilia’s only threat, indeed, her home was too. 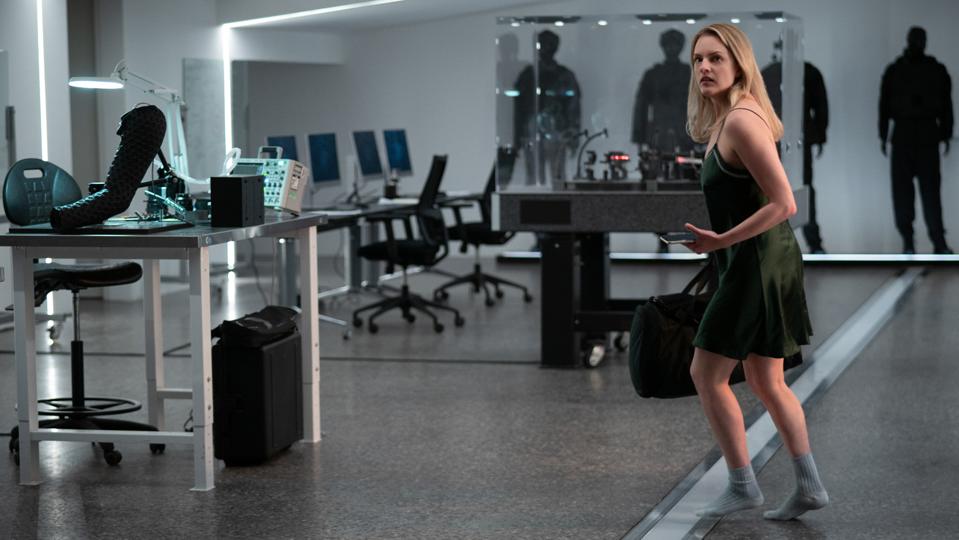 Besides Moss’s compelling performance, Whannell cleverly uses the background to entice just as much fear as the Invisible Man himself in the restive opening scene. Here is where Whannell’s horror-movie vigor excels most. Proving a limited budget ($9 million) with touches of ingenuity and practicality can achieve threatening sequences effectively. Masterfully wielding his small budget, Adrian’s house is used expressively to inform us of their dynamic and his disposition in place of flashbacks between the two. Doing so, entering their property, it incites a sense of isolation and does not feel like a home, but a prison.

It sits atop a desolate hill surrounded by extensive land and an array of water with waves that crash ceaselessly among the rugged cliffs. With a storm-viewing room, it is the first shot of Cecilia and Adrian with his arm cuffing her waist. Even in her sleep, he has control. Then, viewing the interior, the modern open space, with a self-flattering design gives off a cold and eerie semblance. Viewing their home, we gain a greater understanding of Cecilia’s private life and the nature of their relationship without her speaking a word.

The conceit of the design functions to showcase Adrian’s accomplishments, not a loving space to share with Cecilia. The towering walls animate isolation and suggest capture. These revelations in the opening scene are what encourages the audience to root for Cecilia’s escape, while also speaking volumes to the power of showing and not telling. Considering it is not what you do, but about what the people around you do as their response tells the audience who you are. However, the concept of empty spaces found in Adrian’s palatial compound does not stop there.

Whinnell Entrusts in His Directional Choices to Make the Story Anew

Whinnell is smart to continue this idea of empty spaces throughout the film as we witness Cecilia moving in with her friend, James Lanier (Aldis Hodge), and his teenage daughter. Once there, she experiences a series of disturbing and dangerous abuse that draws her closer into a renewed isolation, each scenario caused by The Invisible Man. He manipulates everyone around her to distrust her thoughts and feelings, to appear mentally unstable, violent, and unpredictable. These moments include when he drugs her, strikes James’ daughter, and kills her sister. On top of putting Cecilia in empty spaces, Whinnell begins to introduce suggestive camera movement to engross the audience in her mental state further. Deploying differing points of view, we watch as she tries to convince a skeptical world that the threat is real and not just in her head.

Then, later, witness an empowered Cecilia take her life into her own hands to enact revenge and finally breathe. As a result, demonstrated through Moss’s riveting performance and Whinnell’s astute direction, domestic abuse is realized with consideration. He fully utilizes Moss’s talent to give a voice for women in this updated sci-fi thriller, where he entrusts in his directing choices to add modern sensibilities and enrich the legacy of The Invisible Man.

Did you like this version of The Invisible Man and its telling from the point of view of the victim? What The ‘Before’ Trilogy Teaches Us About Love Harry Potter and The Half-Blood Prince: The Power of Cinematography WRITER (based on the novel by)

Rated R for some strong bloody violence, and language.